My 2007 Yaris doesn't have remote start or door lock / unlock capabilities. In Arizona its REALLY hot in the summer and even hotter inside a car-oven. Easily 170 degrees on a dash. I would like to design a system to interface with my EZ430 Chronos wrist watch as well as my home wireless network (CC2500 based) that is capable of remote starting the car in order to cool it down. Temperature information can be relayed by the MSP430 chip which will be inside the dash or by a secondary wireless node that is directly exposed to the interior temperature. 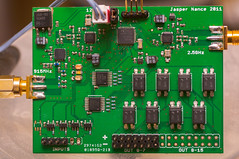 The design will have two radios.

A 915Mhz CC1101+CC1190 radio with 500mW TX power and a 6dB LNA. This will interface with the EZ430 Chronos wrist watch and other CC1101 designs including a possible high-power key-fob so that you can be cool all the way from your office. A CC2500 2.5Ghz 3mW in-car network for transfering data to and from expansion nodes. This will work with EZ430-RF2500 boards and other CC2500 based designs include things like hidden GPS nodes.

The outputs will be provided by clocking the data words into a latching shift register which will drive opto-isolators. This will provide maximum circuit flexibility in case of polarity confusions or unknowns while also keeping the car safe from short circuits or board mistakes (because my Yaris is more expensive than this circuit). 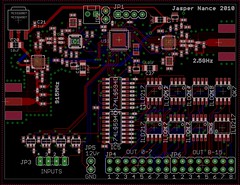 Bill of Materials in XLS Format

Dec 5th, 2010. Board design finished. Jacob Rosenthal showed me seeed studio's PCB service which offers 6 mil traces and 12 mil drills. 10cm x 10cm max, 10 boards for $40. Can even get them in pretty colors for +$10. He also convinced me to make it open source and universal. Hopefully this design will work with any make/model car or truck.

Dec 12th, 2010. Hotwired the car for the first time and measured the relay currents. Some are larger than expected, I need to see if the relays will still activate with inline resistors and what the dropout current is. Used posi-taps and T-taps and feel that the t-taps are better for large wires and posi-taps better for small wires.

Dec 21th, 2010. Attempted to hotwire the car using the ILD217T optocouplers. The optocouplers CTR ratio is terrible at the current level required to activate the relays on the car and the units overheated before actually driving them. A new optocoupler must be sought...

Jan 4th, 2011. Recieved the new optocouplers, FOD852. At 1.5mA drive the output was able to activate all relays on the car including the starter line (which has the odd profile). The opto is in a larger single package... but at least it will work! Now to fit 16 of them onto the board...

Jan 12th, 2011. Sadly, these new optos are so large that I can only fit 8 of them onto one side so the other 8 had to go on the back. But the layout changes are complete. Last step is to decouple the CC1190 because I think I forgot to do that. Then its off to the fab!

Jan 27th, 2011. Decoupling caps and inductors added to CC1190. Off to the fab after the Chinese Spring Festival is over on the 10th of Feb.

Apr 25th, 2011. Board populated. Shift registers and PA inductors on backorder following the disaster in Japan.

July 9th, 2011. Populated shift registers and wrote a quick test code. Looks like its working wonderfully. A quick reflow of some nasty solder joints resulted in a VCC to Ground short. Reflow damaged a 100nF filter cap on the CC2500 which took several days to fix. Last steps are to write the shift code and populate PA

Jan 22, 2013. Discovered a crakced inductor that was blocking the 915mhz output. Took the time to populate the RF PA/LNA. Totally worked!!

MSP430 code be found here (For reference only, all rights reserved) Users are encouraged to 'hack it all up' not only because its fun to do but for the security of the automobile!

Don't whine to me if you brick your car, its not my fault. PLEASE do your own backup research especially if you don't own a 2007 M/T Yaris! DO NOT IMPLICITLY TRUST ANYTHING ON THIS PAGE! You have been warned!