Orias was very sick when I first adopted him.

Orias was presented to me shortly after Trina's death in August of 2005 by a good friend, Alisha Nichols. He was about 4 weeks old and living under Alisha and Jason's house in Potlatch, ID. As can be seen by the photo, Orias was very sickly and was missing patches of fur on his belly and the back of his neck. But, after a trip to the vet and some antibiotics he was as fluffy as ever, though he still retains a slight wheeze.

Orias likes to play fetch. I have only known two other cats that like to play fetch. His favorite toys are Q-Tips, zip ties (tied to each other), and a specific type of fuzzy mini hair tie. 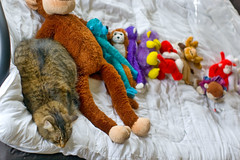 Orias looks a lot like a monkey at times

Orias is also known as:

P-Man has appeared in many films, most notably "Flailing Paddles" and "Paddles of Fury."